Everything I learned starting a $6000/mo dropshipping business

An Overview of the Journey

This is a write-up of the 6-month journey of running e-commerce stores that started in Feb 2017. Within two months of iterations, we were making mid-4-figure revenue per month. We eventually stopped when the paid traffic got more costly, and the experimentation became too time-consuming.

While it was not a big success by any means, I hope other entrepreneurs and hustlers out there have something to gain from this case study.

In the spirit of transparency, I will share all the details about the experience, including the day-by-day payout. If there are parts you would like to see more details on, tweet at me .

Here are some numbers for one of the dropshipping stores we had. We will dive into more details in the sections below. 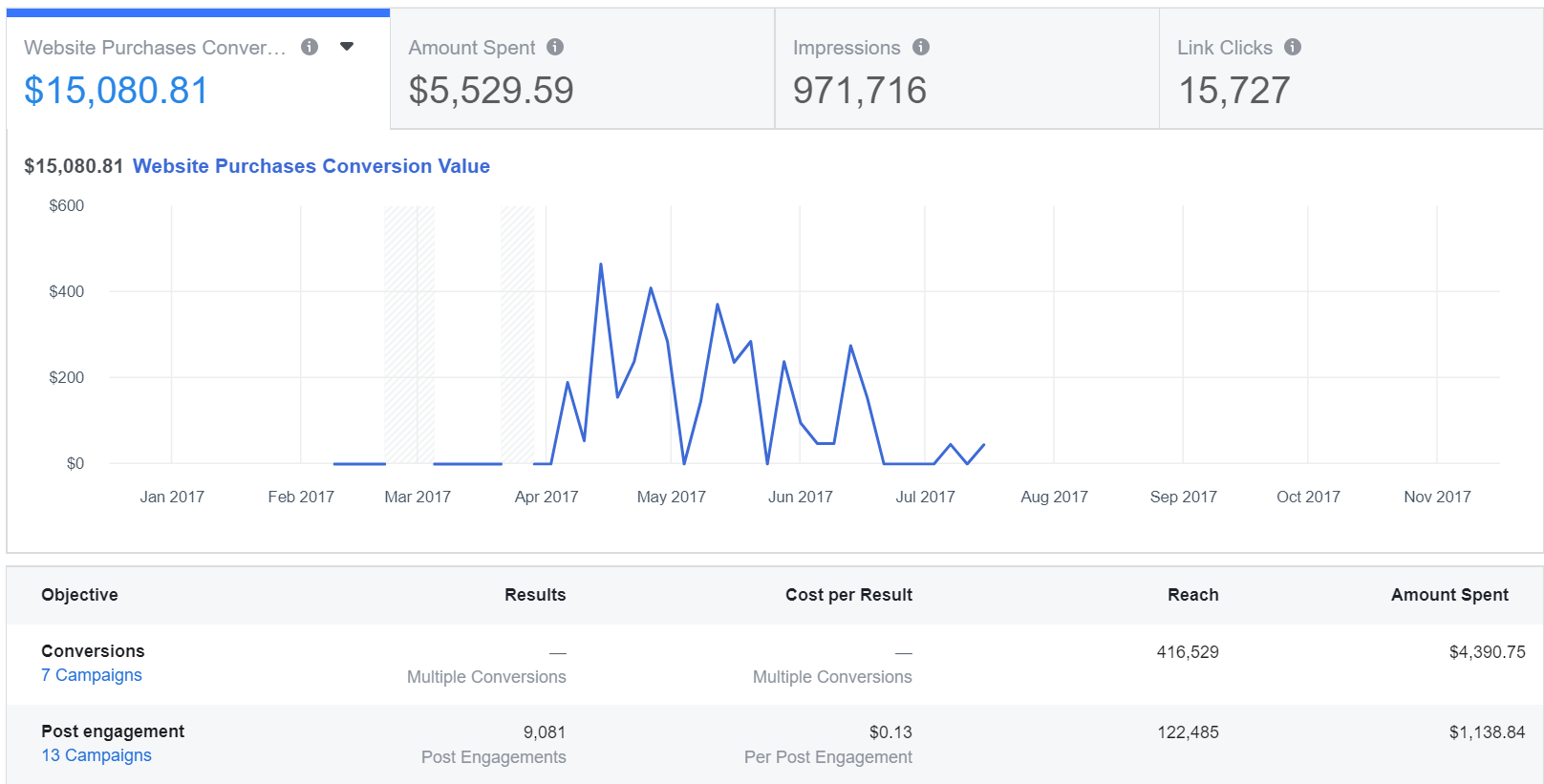 The Beginning - Excitement and big goals

Like many internet entrepreneurs, we started looking into e-commerce for "side hustle" ideas, to get us closer to financial freedom and all that good stuff.

We started brainstorming ideas of things we could sell, and attempted to build a brand that would reflect our own desires: minimalist but stylish fashion for men.

We quickly put together a Shopify site, picked a few products to dropship, and launched our first brand Norwood Lane .

On paper, dropshipping sounded so appealing: no risk, no need for inventory, high profit margin . All we had to do is pick the right products and find buyers! It would be profitable as long as customer acquisition cost (CAC) + cost of buying the product from a Chinese supplier is lower than what we sell the item for. Simple unit economics!

We had high hopes, and started dreaming about where the brand can go: which countries to expand to next, how many designers we were going to hire for our own branded products, where we will have our physical locations, which influencers we should reach out to first to promote our products, when I should decide to turn down the job offer from Microsoft...

Very quickly though, reality just hit us in the face...

We were running Facebook and Instagram ads at the time, but the few sales that we made were at a loss .

None of that worked.

A few weeks in, it was time for Plan B! The products we were selling at that price point weren't working. We needed to iterate.

We decided to launch two more dropshipping stores in parallel - one to test ideas, another to double down on the winning ones:

Each day, we would try an average of 3-5 new products, following this process:

This was an ongoing process. And after a few weeks of trying many ideas, we finally found a few winners. We found product-ad combos that we could repeatedly profit from.

Examples of products we tried

We tried a variety of products targeted at different niches. Here are some of the more popular items:

...and some less successful ones:

In general, it seemed that the more niche the audience, the better the product performed. But finding a winning product is part art, part science. There were many products that we thought would be winners that flopped, and vice versa.

Doubling down on the winning products

One of the items that started picking up in sales was a flamboyant rash guard featuring a oriental-esque mythical creature: 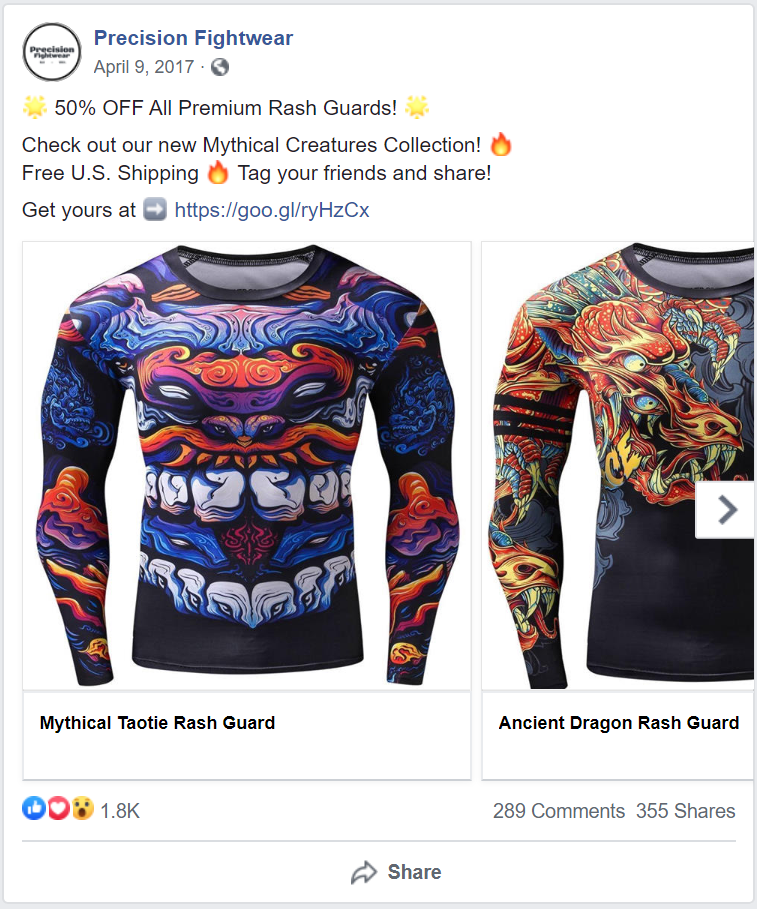 First there was order, then another on the same day. Then there was another. We knew something was working.

We moved fast to create a specialty store front to brand around this - Precision Fightwear , selling MMA/BJJ training gear.

With the more focused brand, we expanded the product catalog, and replicated the ad campaigns that worked by reallocating our ad spends to the winning products. We curated a few more similar designs from various suppliers, and build our best-selling Mythical Creatures Collection .

We were pricing each product at $40-50 a piece. And we would purchase them from our suppliers for $10-20 each. Our shipping time to the US would be around two weeks, which was an issue for some customers. To address this, we simply had a dedicated email address for shipping inquiries, and manually answered them as soon as we received them.

Our main marketing channel was paid ads. Facebook ads in particular. We had tried other ad platforms, such as Instagram and Google / Bing ads. But it was with Facebook ads that we were able to consistently make a profit, thanks partly to the great targeting capabilities.

As Charlie Munger would say: repeat what works. We happily did that.

It worked, but only it didn't.

By July, we were starting to see losses on some days, though sales where still coming in. The cost of running ads and buying the products from our suppliers exceeded what we were making from our customers.

Apparently this is common pattern for internal marketing channels in general. So much so that Andrew Chen termed it the Law of Shitty Click-throughs , and described it as a "strong gravitational pull".

We tried a few more things to fight this gravity. Tweaked the ad copy. Changed the ad audience. We created new product lines, selling Muay Thai gears, and even started selling our own branded rashguard (custom designed, not dropshipped).

A lot of time spent, not much results. A few more months later, we finally decided to wind down the store and put our energy on other projects.

It could have been that we exhausted the niche within MMA enthusiasts. Or that ads were getting more competitive. Or that competitors popped up (a particularly severe issue with dropshipping businesses). There were many factors at play, and we would never know exactly why it stopped working.

Looking back, it was a good run. Going in with zero prior experience forced us to learn on the fly. And when there were customers banging on our doors, we had no choice but to get our acts together.

Going forward, I don't think dropshipping is for me. It requires a constant effort to keep testing and promoting product ideas. And the process can get exhausting. The flip side of the low-touch model is that it comes with a low level of control. Too many things can eventually go wrong that would be hard to fix, for it to be a sustainable business model.

Hope you enjoyed this post. Let's stay in touch.